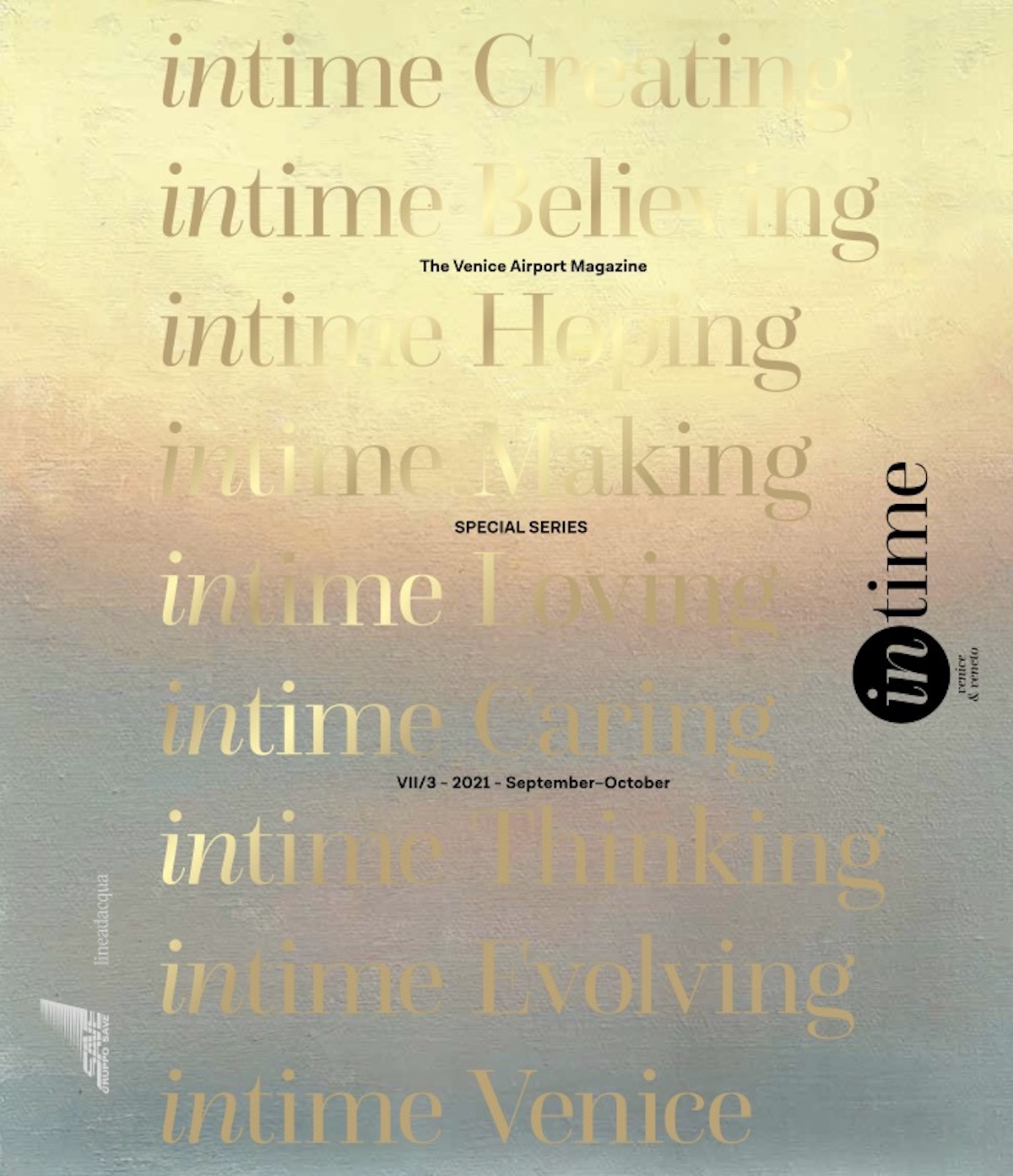 Despite its stereotypical products for mass tourism, Murano is still the Mecca of glass creation, thanks to its unparalleled mastery. Today, Murano’s artistic reputation is a tad tarnished compared to the golden age of the interwar period – rich in artistic collaborations launched by Paolo Venini – and then compared to the post-war period of the Italian design boom. However, the creative engine has not stopped heating Murano, especially as regards this island’s main sector: glass tableware. This article proposes to evoke some contemporary examples provided by different players in the field, be they factories and designers or artists and fashion stylists.

Among the companies specifically engaged in the production of tableware in Murano, one of the most active is Carlo Moret- ti. The company’s image has been modern from the outset. Its showroom was conceptualised by Gaetano Pesce who also de- signed a few tableware items for the firm. Carlo Moretti’s very distinct, joyful and colourful style has been preserved in the cur- rent company, although it no longer belongs to his family. Anoth- er historical factory specialising in tableware is Nason Moretti which offers a wide variety of modern glass. Sis- ters Marina and Susanna Sent, designers who come from an old Murano glass artisan family in Murano, create jewellery as well as various every- day objects, such as a series of plates made of their own original murrine fused together. 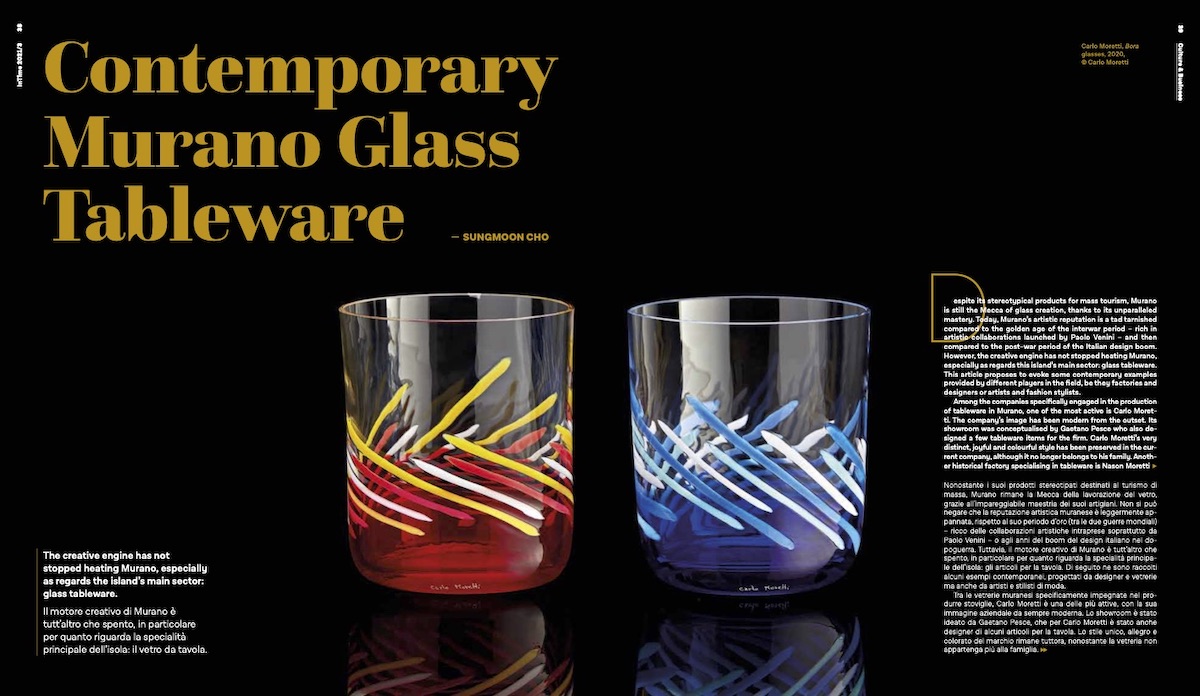 In addition to these companies, a number of designers collaborating with different Murano workshops are also contributing to the revival of tableware. A young design studio, Stories of Italy, founded in Milan in 2016, has been focus- ing in particular on the production of tableware. Their Macchia su Macchia goblet made in Murano exalts the tactile and vibrant effect of material- ity using glass beads incorporated in the matt surface. Venetians are also participating in the revival of the Murano glass. For over 20 years, under the name of Giberto Venezia, Giberto Arrivabene Valenti Gonzaga has been perpet- uating the tradition of the Venetian nobility to cherish the city’s signature art, glass. He revisits classic models paying the greatest attention to the quality of execution. The Laguna, inspired by the lagoon landscape, takes the classic oc- tagonal shape, sublimated by a refined touch, the Avventurina border. Alongside this classical lineage, Yali Glass studio, founded in Venice in 2008 by Marie-Rose Kahane, renews the art of the table with a sense of minimalism. The pure forms and subtle colours of its models recall the works of Scarpa for Venini. A freelance designer based in Venice, Gaetano Di Gregorio, creates a dialogue between glass and ceramics in his model called Doppiopiatto: a terracotta plate is used to give shape to a glass plate, and the two plates form one.

Among the contemporary artists working with glass in Murano, several have created function- al objects for the table in parallel to their art practices, to diffuse their artistic language into everyday life. Tristano di Robilant, an Ameri- can-Italian artist, applies his original, enigmatic, childlike and dreamlike vocabulary not only to his one-of-a-kind sculptures but also to limited edition tableware. Among the artists based in Venice, Maria Grazia Rosin transposes her whim- sical universe populated by invertebrate animals into tableware. The ruby glass wrapped in gold leaf perfectly expresses the organic and slippery quality of the flesh of these animals. Silvano Ru- bino, who works in multimedia, has created a se- ries of Calici Impossibili by reversing the function of the object.

Finally, the world of fashion, which for the last forty years has been investing in creating a transversal lifestyle, has brought new breath to Murano. In the 1980s, Murano began to develop creations for luxury brands that sought to inte- grate domestic objects into their clothing col- lections. One of the first designers to come to Murano was Versace, who worked mainly with Archimede Seguso. Recently, this movement has been intensifying with independent fashion designers who are working to draw closer the link between fashion and craftsmanship. The Parisian brand Cristaseya transcribes its time- less and relaxed style in a series of goblets sim- ply decorated with irregular stripes. The result of these various actors producing in Murano glass tableware allows users in their daily lives to taste the flavour of high craftsmanship as well as contemporary aesthetics. 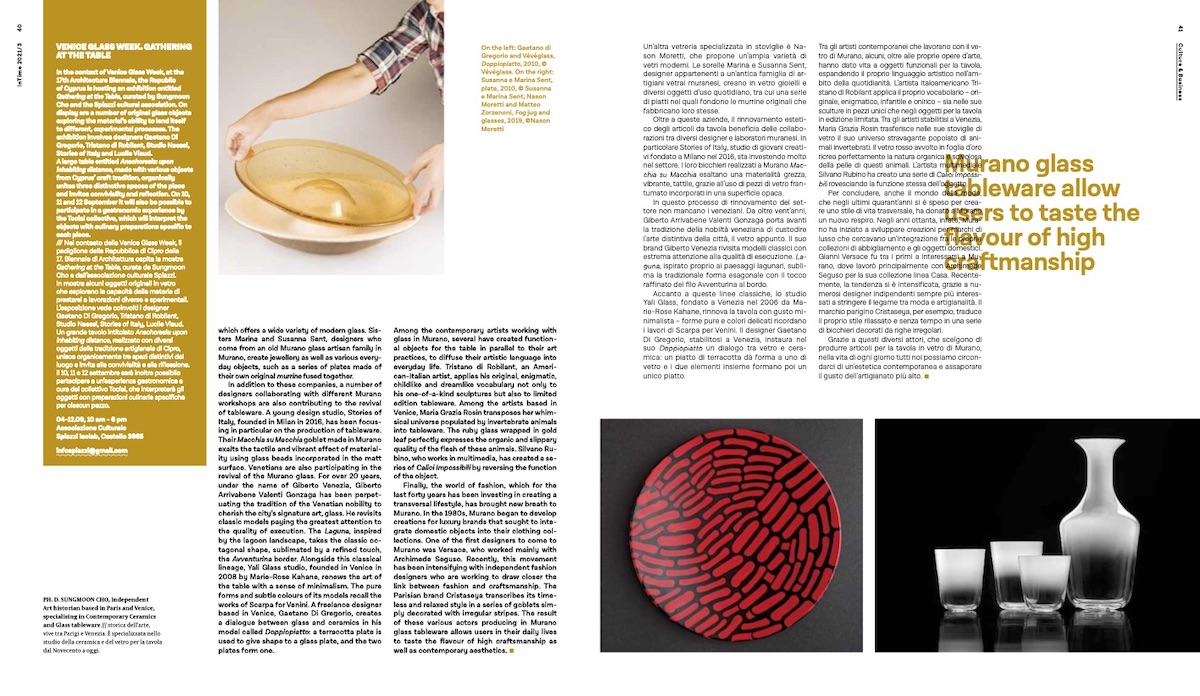