The stars of this year’s edition include Marina Abramović in alabaster, Matisse’s etchings, and bears from deep in the heart of the Black Forest.

Visitors are greeted by her new immersive installation, Five Stations of Maya Dance (2018), a series of translucent alabaster portraits in deep relief with LED lighting that evokes something of her charismatic presence. A collaboration between Lisson Gallery and high-tech art production company Factum Arte, the work is part of an edition of three, plus three artist’s proofs.

Salomé Prada of Factum Arte tells artnet News that the edition presented at the fair is on hold for a museum. (Five panels are priced around £400,000, or $524,000, in total, not including the installation designed by the architect Charlotte Skene Catling.) Prada says that the studio is also working on life-sized portraits of Abramović, this time carved into a form of plastic. All will be revealed at the artist’s major solo show at the Royal Academy of Arts in London in 2020.

Meanwhile, a sculpture created by the Italian artist Gilberto Arrivabene Valenti and Factum Arte’s founder, Adam Lowe, is tailor-made for a cross-collector seeking something classical with a contemporary twist. Realized using both digital technology and traditional Venetian glass-making techniques, the pair’s interpretation of Canova’s reclining nude Paolina Borghese has just been acquired by London’s Victoria & Albert Museum for an undisclosed sum. The work, Paolina after Antonio Canova (2018), is part of an edition of 12. 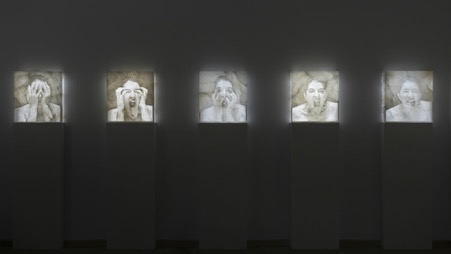